Joshua Tree National Park is a California desert area about 130 miles east of Los Angeles. The area inside the park might not look that much different than the 50 miles or so of desert outside the park, except for the striking presence of Joshua Trees, or, yucca brevifolia. 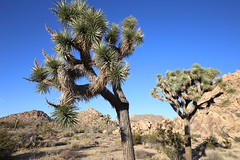 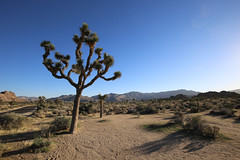 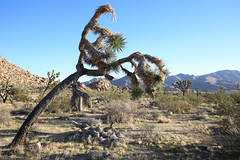 As with any photographic subject, lighting is important. It might be easy to make your way out to the park at noonish, but the mid-day sunlight makes for pretty flat, uninteresting pictures: 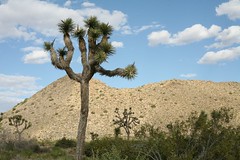 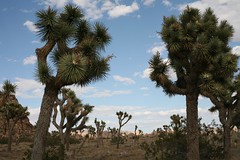 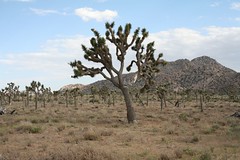 I would rather get some flat, uninteresting pictures of interesting subjects than get no pictures at all, but even better would be to get out to the park early in the day (before or just after sunrise) or late in the day (just before sunset): 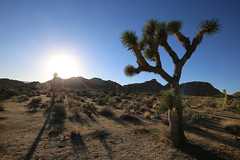 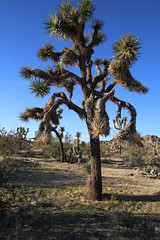 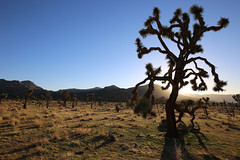 As the sun sets, the darkening sky yields views of the trees and the park that look much different than what you see in daylight: 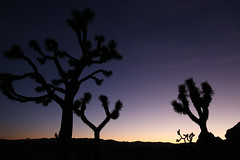 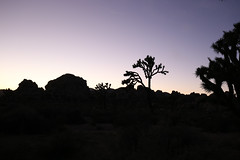 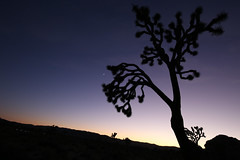 That was about the end of the sunset picture-taking for me, as I did not take a tripod, and with the final bit of sunlight gone, it was hard to capture anything else. If you do take a tripod (and you should, if you plan to stay past sunset), then you can get a whole new category of Joshua Tree photos, including distant stars in the background.

Watch your step, though! The park is home to a variety of creatures, including tarantulas and scorpions, which tend to stay burrowed underground during the day and come out at night. (I saw no animals at all while on foot, but did see a coyote along the road as I drove to the park exit.)