Mozilla has put together a guide to some popular internet-connected home technologies, including children’s toys, with descriptions of to what extent these devices could be used spy on you or your family.

Voice-controlled computing that could benevolently observe you and track your location looked so neat on Star Trek; now that it’s actually here, I don’t think I want it in my house…

Seven Months with a Fitbit 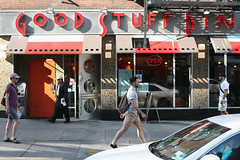 A little over seven months have passed since I started using a Fitbit. Trying to meet my daily step goal, even while I have not reached it every day, has undoubtedly resulted in me walking more than I would have otherwise. I still feel encouraged seeing my Fitbit iPhone application light up when I reach my goal, and feel embarrassed when I see that I failed to do so.

One of my favorite Fitbit motivators seems to have slowed substantially. The application celebrated my reaching various points such as 10,000 steps in a day, or 25 flights of stairs in a day, with presenting a cheerful badge. While it still records how many times I have walked 10,000 steps in a day, it only makes a big deal out of presenting you with the badge once. I suppose if it’s an achievement that you reach basically every day, getting the badge over and over could get old and annoying, but perhaps the application could be smart enough to see that some achievements you reach only infrequently, and try to make a bigger deal out of those every time.

Another suggestion for the Fitbit outboard software: the solo challenges are really nice. Having walked in Manhattan in person, I especially enjoyed pretending to walk along the various lengths of New York maps. But after a month or two, the half-dozen built-in maps started feeling boring. How about letting users create custom maps? Or, as an additional revenue source for the company, Fitbit could offer more maps as 99-cent add-on purchases.

If they would really like to splurge along these lines, perhaps some sort of virtual reality technology could be developed, so users could be standing in their living room walking in place, but seeing what it would look like to walk in various locations.

The Fitbit device itself seems to be holding up just fine to daily use. The wristband broke a few weeks ago, I suspect due to being stressed from a dog leash around my wrist (the other end of which being attached to a certain border collie suddenly lunging toward rabbits or deer or other points of interest along the trail). Amazon reviews of inexpensive third-party Fitbit bands didn’t look entirely optimistic, so I ordered a replacement directly from Fitbit.

One of the new features that Fitbit rolled out this year was to offer tracking of sleep stages, not just time spent sleeping. While I usually remove my Fitbit when sleeping, for the times that I have left it on, I have not yet seen it report any sleep stage information. I’m not sure if this feature only works on select Fitbit models (not including mine?) or what.

Overall I have been very happy with the product, and look forward to seeing more fitness-encouraging features be developed over time. [As a disclosure, I have in fact been so impressed with my Fitbit, and hopeful for the company behind it, that I am at the moment a stockholder.] 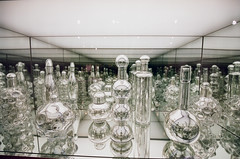 Having thoroughly enjoyed seeing the movie Hidden Figures, I wondered about the “old math” breakthrough shown late in the story, when the Euler method is applied to aerospace calculations, after several scenes claiming that the math needed to do the calculations did not exist. While I remembered Leonhard Euler as the graph theory guy, I had to look up the referenced method.

The movie did not go into details, but perhaps the numerical approximation approach was key because the IBM 7090 Fortran programs that they were using to automate calculations was not able to handle symbolic differentiation and integration yet? Symbolic calculus on computers started becoming possible over the next decade, but a numeric approximation would clearly have been the best approach to feed into the computer they were using in the early 1960s.

This still doesn’t answer, though, why using Euler’s method would have been such a breakthrough. The method was written up in Hamming’s classic 1962 book on numerical methods, so while it was indeed “ancient” math as depicted in the film, it was hardly unknown. I guess we might have to presume that then (as now) a study of numerical approximations to symbolic calculations are not necessarily a mandatory part of a university mathematics education? I have worked with aerospace engineers for more than twelve years, and I would not be at all surprised if most of them have never studied numerical methods at all…  but hey, I didn’t take the class either… :-/

Fortunately, we have access today to unprecedented quantities of free and low-cost mathematics educational materials, and any movie that inspires us to take some time to study is surely a good thing.

The Art of the Deal 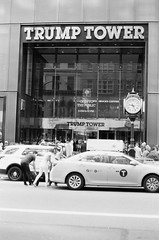 Wanting to learn more about our new president, I just finished reading The Art of the Deal.

The book recounts stories of several business projects he had worked on from the 1970s into the mid-1980s, ranging from low-income housing in Ohio to extremely-high-income housing in Manhattan, to renovating hotels, to building casinos, to finishing civic projects on the behalf of the city, to running a major sports team. There is little directly actionable advice for would-be business people in this book, but readers can pick up on the author’s attitude of success. Some takeaway points that I got include:

In light of recent current events, I found the last page or so of the book especially poignant:

I’ve spent the first twenty years of my working life building, accumulating, and accomplishing things that many said could not be done. The biggest challenge I see over the next twenty years is to figure out some creative ways to give back some of what I’ve gotten.

I don’t just mean money, although that’s part of it. It’s easy to be generous when you’ve got a lot, and anyone who does, should be. But what I admire most are people who put themselves directly on the line. I’ve never been terribly interested in why people give, because their motivation is rarely what it seems to be, and it’s almost never pure altruism. To me, what matters most is the doing, and giving time is far more valuable than just giving money.

In my life, there are two things I’ve found I’m very good at: overcoming obstacles and motivating good people to do their best work. One of the challenges ahead is how to use those skills successfully in the service of others as I’ve done, up to now, on my own behalf.

In the pages of this book, I saw someone extremely motivated to succeed, but not greedy. He seems genuinely interested in the well-being of others, and builds great things not so much for his own personal gain, but to enhance the lives of everyone around him.

First Week with a Fitbit 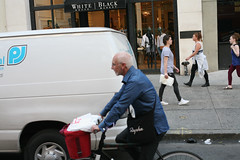 I have been using a Fitbit Charge 2 over the past week, with the goal being to improve fitness through measurement and digital encouragement. My iPhone already tracks steps walked, though. What else does the Fitbit offer?

Some Fitbit devices, including the Charge 2, track heart rate. This is useful for recording a measurement of intensity of exercise. And in turn, that is useful for weight management. If you enter your weight, height, and age, and if you honestly record calories eaten, the Fitbit tracks your steps and heart rate, and tells you how many calories you should eat in the day, if you want to gain weight, maintain weight, or lose weight. Rather than having a static number of calories for the day, or even a flexible number based on vague notions of “light exercise” or “moderate exercise”, the Fitbit seems to do a decent job tracking how much exercise you actually get and adjusting remaining calories accordingly.

The outboard Fitbit software (on iOS or web or whatever) provides opportunities to connect with other Fitbit users for good-natured competition, alerting you that “Oscar has almost caught up with you!” or “Laura has completed her step goal for today!” and so on. Even when not connected with any other users, you get alerts and electronic “badges” for various fitness achievements. Both of these, while happening entirely in the digital realm, are surprisingly motivational.

When using the iPhone to track my steps, I would make sure to grab it before going on what I knew to be a long-ish walk, but I would routinely leave it charging at the computer when going on shorter excursions. The Fitbit is more conveniently always with me, taking the place of a wristwatch.

So far, the step counter seems reasonably accurate to me. Extreme arm movements can trigger a false step, but apparently I don’t do much of that when not actually walking (or at least exercising). It does, however, record arm movement when playing the piano as steps; a few days ago, it recorded about 2000 false steps before I took it off and put it in my pocket. Now I know to just take it off before playing the piano.

Curiously, there is no way to turn it off, and no easy way to get it to pause in recording steps. A simple on-device click for that would be a preferred solution, if I were about to engage in activity for which I knew it would record false steps.