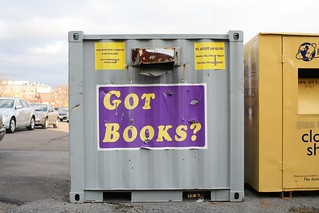 The New Yorker has an article this week on Weeding the Worst Library Books. Have you ever been perusing the shelves of your local municipal public library and wondered why they keep such old, weird, pointless, and/or useless books sitting around? “Weeding” is the delicate art practiced by librarians whereby books are selected to be discarded in order to make room for new books to arrive. Apparently this is best done only a few books at a time, rather than forty thousand books all at once, as attempted by former Berkeley library director Jeff Scott.

The library’s director, Jeff Scott, announced that his staff had “deaccessioned” texts that weren’t regularly checked out. But the protesters who gathered on the library’s front steps to decry what became known as “Librarygate” preferred a different term: “purged.” “Put a tourniquet on the hemorrhage,” one of the protesters’ signs declared. “Don’t pulp our fiction,” another read. … A thousand people signed a petition demanding that Scott step down—and, in the end, he did.

What kinds of books get weeded out, exactly, and why? The article introduces us to librarians Mary Kelly and Holly Hibner, who maintain a weblog about library books likely to be on their way out the door. Some books are highly desirable to be on the shelves, but get worn out from years of use. These may well be discarded only to be replaced with a fresh copy.

Many more books are shown the door by virtue of their antiquated content: books about applying for jobs in the 1970s, or projecting what things might be like if we could ever launch a spacecraft off the planet. Other books perplex and mystify today’s readers who wonder why the book ever existed in the first place, such as an illustrated children’s guide to Wax In Our World.

I feel that I understand, though, the bitter reaction toward book weeding. I only have so much space on my own home library shelves, and sometimes I feel wistfully compelled to clear out some older books to make room for newer. Even when the practical utility of the old books is obviously minimal (e.g., discarding a first edition of The Java Language Specification while keeping the third edition), a mixture of emotional attachment and vague concern that a legitimate use case might arise makes weeding challenging.

Browsing Mary and Holly’s blog about discarded library books is encouraging, though! If you fancy the idea of writing a book, but aren’t sure that you have any ideas that would be worth putting into book form, there are almost certainly numerous examples of worse book ideas already out there…