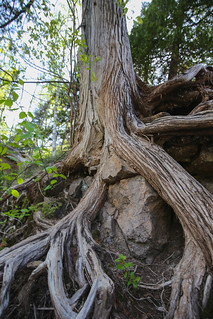 I came into the house a few days ago to be greeted by a border collie (which I expected) and a stream of ants (which I did not expect). The stream of ants started roughly at the garage door which I came through, into the laundry room, down the hall, and into the kitchen. Inside the kitchen, I found the highest concentration of ants, enjoying a single piece of shredded cheddar cheese that had been dropped on the floor. I began killing the ants one by one, but after clearing an area, more showed up. I eventually gave up for the night.

The next day, the ants were fewer, but still disturbingly numerous. I begin cleaning the floor with watered-down vinegar to erase their odor trail, and with watered-down peppermint extract as a deterrent. (Supposedly ants do not like the smell of peppermint.)

These measures cleared out the ants even more, but did not stop them. I was hesitant to put any toxic chemicals in the house lest Samantha the border collie inadvertently get into any of it, but I also noticed that there was a pretty steady stream of ants walking around just outside the garage door where we have the trash can.

Online reviews suggested that of the readily available ant traps, Terro Liquid Ant Baits might be the best, so I put a couple down in the garage near the ant gathering. Within a few minutes, the ants started checking out the bait. Within a few hours, numerous ants had gathered at the bait, and were beginning to die.

Meanwhile, back inside the house, the ant numbers were dwindling. There were barely any more at all seen in the house. The following day, there were almost none. Over the next several days, I continued to see an occasional ant, but sightings became increasingly rare.

I’m not sure how the ants ended up in the garage in the first place, but thanks to Terro Liquid Ant Bait, it appears that the age of the ants is coming to a close.