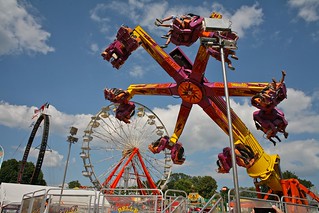 This past spring I read Seymour Papert’s Mindstorms as part of the MIT Media Lab Learning Creative Learning course. Having been delighted with that book, I just finished reading Papert’s follow-up book, The Children’s Machine (Rethinking School in the Age of the Computer).

Published in 1993, this book comes across as technologically more modern than 1980′s Mindstorms, though still obviously dated. For me, it is dated in an especially nostalgic way, as it was around the late 1980s / early 1990s that I was first learning about computer programming, and I can personally identify with some of the stories and concepts that Papert discusses here.

Broadly, this book might be viewed as a refinement of Mindstorms, whereby Papert had over a decade of additional experience and observations with which to form stronger, clearer opinions and gather more data and anecdotes. But while Mindstorms seemed to focus more on the specific idea of creating virtual educational worlds on the computer in which students could more easily learn abstract ideas, the present book steps back even further to look at understanding learning itself better.

Papert advances the term mathetics for describing the study of learning, as opposed to pedagogy, the study of teaching. Are there methods we can use ourselves, or encourage in students, to identify what needs to be done on the learner’s side in order to learn better? To rely on “being taught” without exerting enough effort on “learning” puts things out of balance.

This concept of mathetics is woven into accounts of using computers to improve how learning takes place, especially through creative learning techniques of building virtual things with computers, and through the notion of learning a concept better by teaching it to the computer via programming. For example, we read some stories about the development and usage of the Logo programming language and the Turtle programming system that was developed with it, and how this grew into a form of cybernetics controlling robotic Legos. Here’s a short example, in this instance about using Mitch Resnick’s multi-turtle Logo variant, *Logo:

Two high school students who had recently received their driver’s licenses decided to use *Logo to show cars moving on a highway. The students started by creating several dozen turtles, each representing a car. The program consisted of two simple rules. If a car sensed another car ahead of it, it slowed down. If it didn’t sense another car, it speeded up. With this simple program the students did not expect much to happen, but when they ran it, the cars bunched into a realistic-looking traffic jam. … It is worth noting that the students appreciated the self-organizing nature of the traffic jam only because they had written the programs themselves. Had they been using a packaged simulation, they would have had no way of knowing the elegant simplicity of the programs underlying the jam.

The front cover quotes School Library Journal as saying, “Educators with a vested interest in the status quo will hate this book. It is about their demise.” Indeed, there are numerous points brought up for consideration about how the educational system could be improved, including scathing criticism of attempts to nationally standardize education and judge student development based on standardized tests. Along these lines, Papert poses an interesting query for educational administrators:

[O]n my reckoning, the fraction of human knowledge that is in the [school] curriculum is well under a millionth and diminishing fast. I simply cannot escape from the question: Why that millionth in particular?

If you must limit yourself to reading only one Papert book, Mindstorms came across to me as more fresh and exciting, but the creative learning aficionado will get valuable insight from reading both. The paperback edition is available at Amazon. No electronic edition appears to be available.